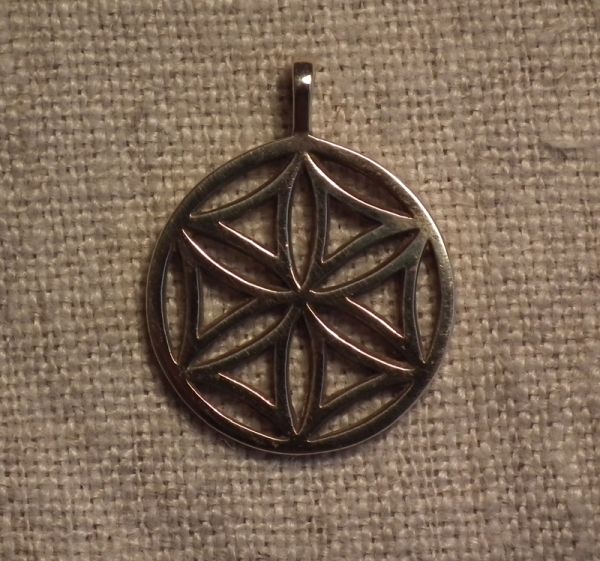 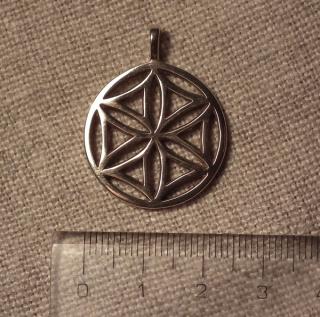 Bronze pendant. This symbol is documented already in the Bronze Age in the Mycenaean culture of Greece (1600-1000 BC). In the Czech Republic, it's documented on a Germanic comb from the 5th century, on a Slavic target from the Great Moravian Empire (around the 9th century), on Renaissance houses in Český Krumlov and České Budějovice. In the 19th century on peasant houses and in the first half of the 20th-century on folk woodcarving, etc. The symbol is widespread mainly by the Balts and Slavs, but it can also be traced even in Germanic-speaking nations. In the US, this symbol is on houses in Pennsylvania (Pennsylvania dutch hex symbols). It can be interpreted as a six-leafed sun symbol or as the World Tree. The sun symbol can be represented by a circle of a various number of rays (here 6 leaves of a flower). In the case of four rays, it's a representation of four sun holidays, two solstices and two equinoxes. Six rays (leaves) can be six basic positions of sunrise and sunset when viewed in the landscape during the year: At the time of spring and autumn equinox the sun rises in the east and sets in the west, so the two equinoxes are identical (2 arms in a circle, East-West). In the winter solstice, sunrise and sunset shift to the south (2 arms in a circle, East-West), and in the Midsummer, sunrise and sunset move to the north (2 arms in a circle, East-West). If we see this symbol as a representation of the World Tree, it means that one triple twig (three flower petals) points upwards to symbolize the tree crown, and the other triple twig points down and symbolizes the roots of the World Tree. Size without the eyelet is 2.4 cm.