Home / Make your own design

Make your own design


We offer you the possibility to create products in our style, but according to your own design. We can agree with your own idea, but we can also supply some of our documents. The resulting work can then be a combination of your ideas and our designs. The source of our inspiration is in history, archeology and folk culture. In our work, you will find decorative styles from the Stone Age to the Early Middle Ages and then around the 18th century to the first half of the 20th century. In history, we focus on the cultures that lived in our territory. Sometimes we seek inspiration from the same cultures abroad. This can practically manifest itself in the connection of the native Celts with their historical counterparts in Ireland, the native Germanics and Scandinavia, the native Slavs and the Eastern Slavs (Belarus, Ukraine, Russia). This is symbolically illustrated by the following three examples of our work, which include Celtic (statuettes), Germanic (engraved stone) and Slavic culture (engraved corner). We are also inspired by the Baltics and its geometric patterns. The issue of identity and history is addressed in the article Mythology. We mainly use spiral patterns, geometric style, and entanglements. Below we will try to explain some patterns and show some of our work. It is, of course, possible to agree on the final form of decorating various products with your own design, that isn't in our offer. Various symbols can be found in our work quite regularly. The meaning and history of symbols is described in the article Symbols.

You can see some of our already sold (or donated) works and much more in our Photo Gallery. You can check it out:

Two small carved statuettes made on request are inspired by Celtic mythology and tradition. The statuettes are a god and a goddess. The god holds an oak twig and has an oak wreath on his head. Oak was a sacred tree of Celts, Germanics, Slavs, and Indo-Europeans in general. The goddess wears a specific Celtic jewel of the La Tene period (circa 5th-st century BC) cravat, torques. 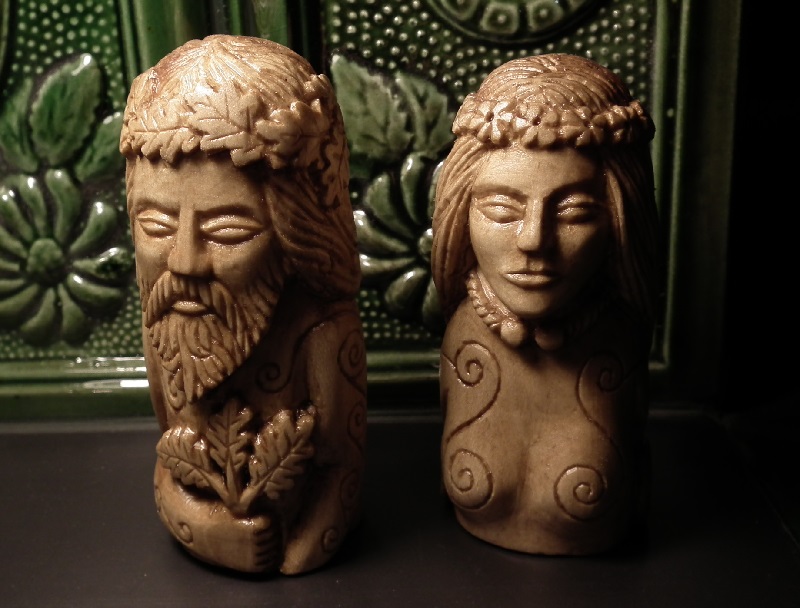 A Celtic god and goddess

Engraved pictorial stone with a motif from Nordic mythology. The engravings are colored with reddish-brown color via a small brush. On the stone, there are three nordic Norns - fates. The Norns symbolize the past, present, and future. The unknown future is partially shrouded. Their nordic names are Urd, Verdandi, and Skuld. 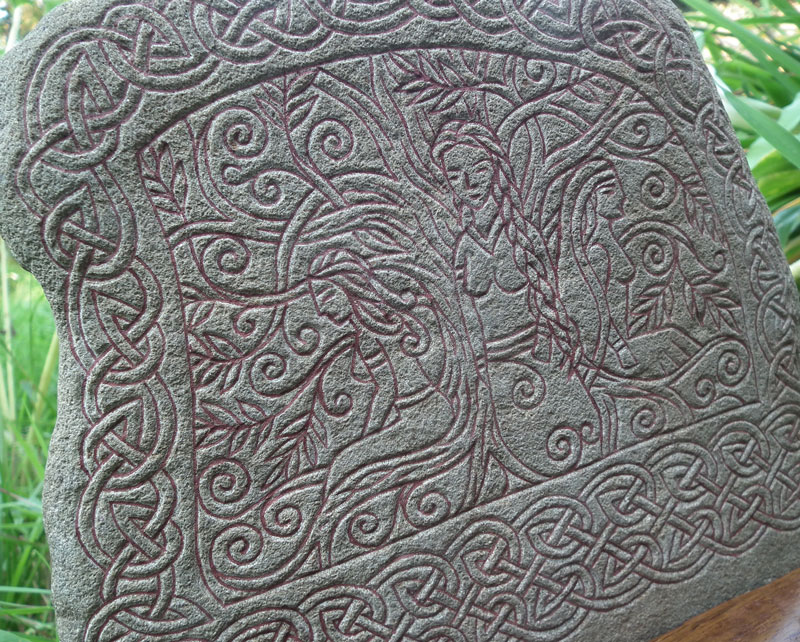 Engraved horn, also made on request, is inspired by Slavic culture. The patterns on the horn are engraved according to archaeological findings from the Great Moravian Empire. At the top on the right side, there is an engraved Slavic zoomorphic swastika (according to findings from the Czech Republic and Slovakia). Below it, there's a symbol of the Slavic Tree of Life and various plant motifs. There are also grapes, which are at that time also archaeologically documented on bronze objects. 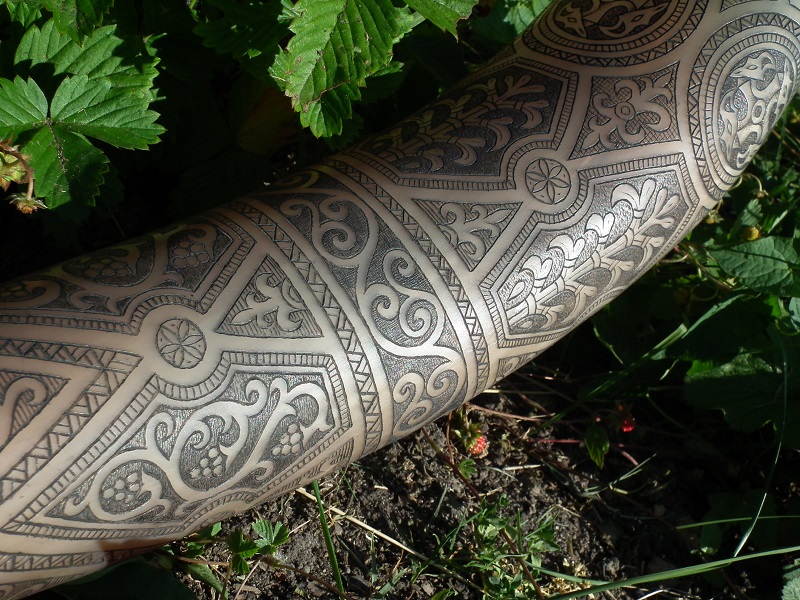 The patterns of geometric tapes and entanglements were created from our drawings. These drawings can be viewed in our gallery.

Geometric patterns appear in multiple cultures at different times. They can be found engraved on mammoth ivory even in 10 000 BC (Mezin). Later at the end of the Stone Age on ceramics in the Hallstatt and on Germanic ceramics and clasps, etc. in the first centuries AD. Geometric patterns can also be found on folk embroidery of the Baltics and Slavs. In the picture below, we have some of our sketches of tapes inspired by the Baltic folk embroidery. There are many more patterns, this is just a small example. 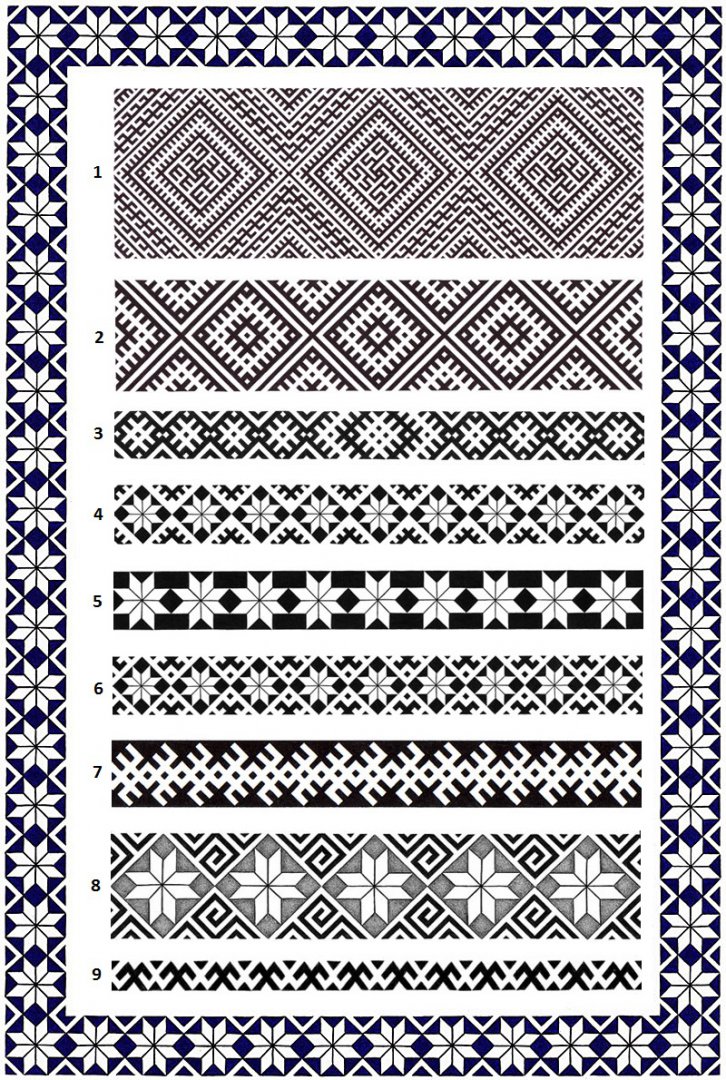 Some geometric patterns with symbols of the Sun, stars, Heavenly Horses, etc.

Entanglements are today probably the most popular through Celtic culture. In the earliest times, the Celts didn't use entanglements; their style can be found in the Hallstatt and La Tène culture. Intertwined patterns appear only in the late Celtic culture at the time of transition to Christianity. Very often entanglements also occur on Germanics findings. In our country, in the Germanic Langobard cairn on Žurá, the rest of a beam with an entanglement pattern was found. The entanglements can be associated with the Germanics of the Migration Period and Early Middle Ages. Vikings gradually developed several artistic styles, such as the Oseberg style according to the finding of the Viking ship in the mound, Mammen style according to the ornate ax, etc. Here we have some basic drawings of entwined strips. 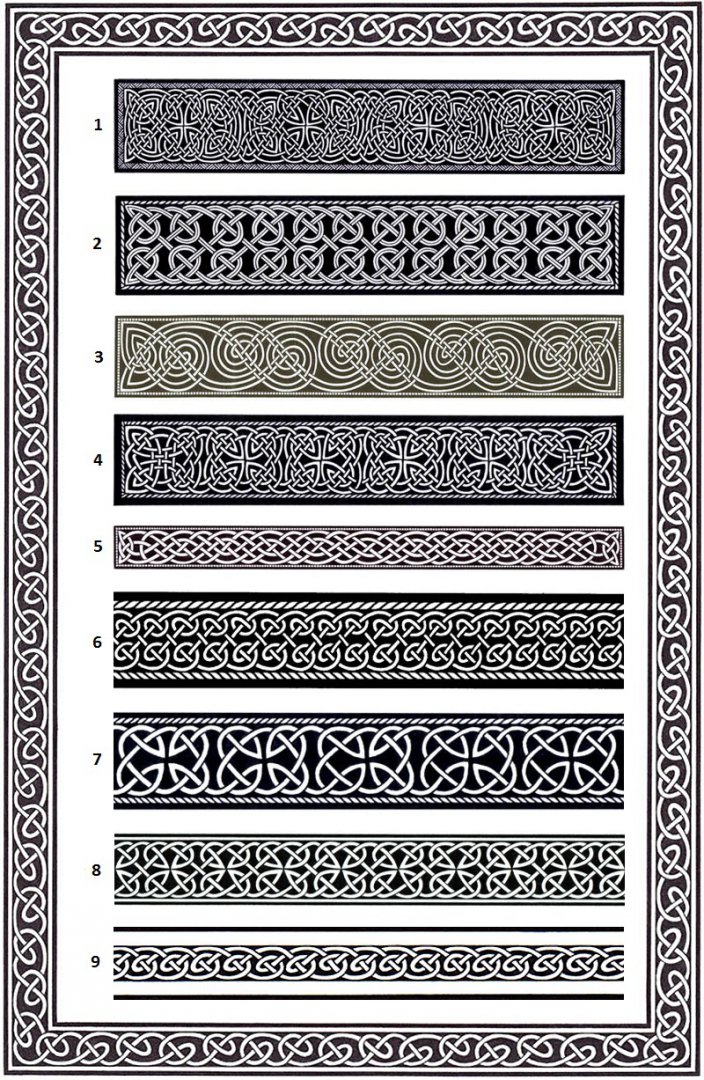 Some of the basic patterns with entanglements.

Spirals can be found on the ceramics of Neolith in linear culture. Spirals and spiral patterns were very popular in the Bronze Age. Spirals can be found on designs in later times - the Celts, Germanics, and Slavs, but not that much like in the Bronze Age. Various spiral patterns in plant and other motifs also appear in folk embroidery. Here is an example of our engraving of spirals on a bronze sun disk. 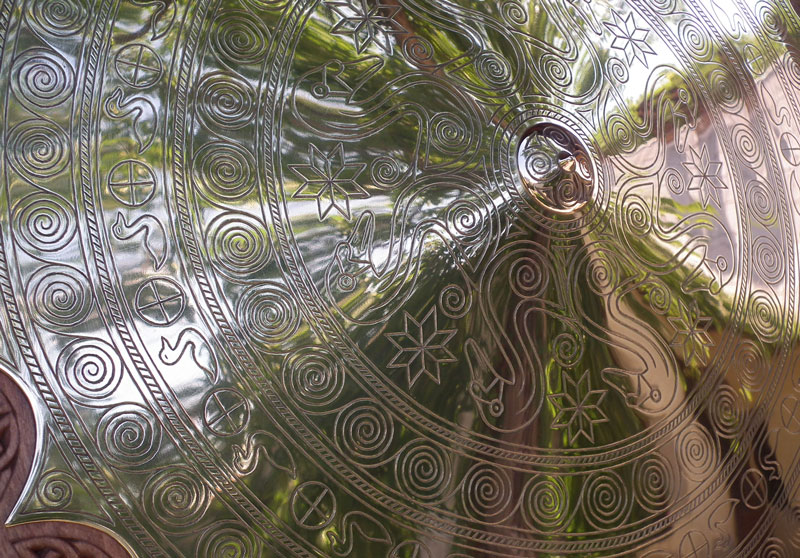 In the pictures below, there are several motifs on engraved slate slabs. These ornaments can be engraved in a slate, ordinary stones, metal, wood and can also be drawn. We have more motifs engraved in the slate in the gallery. 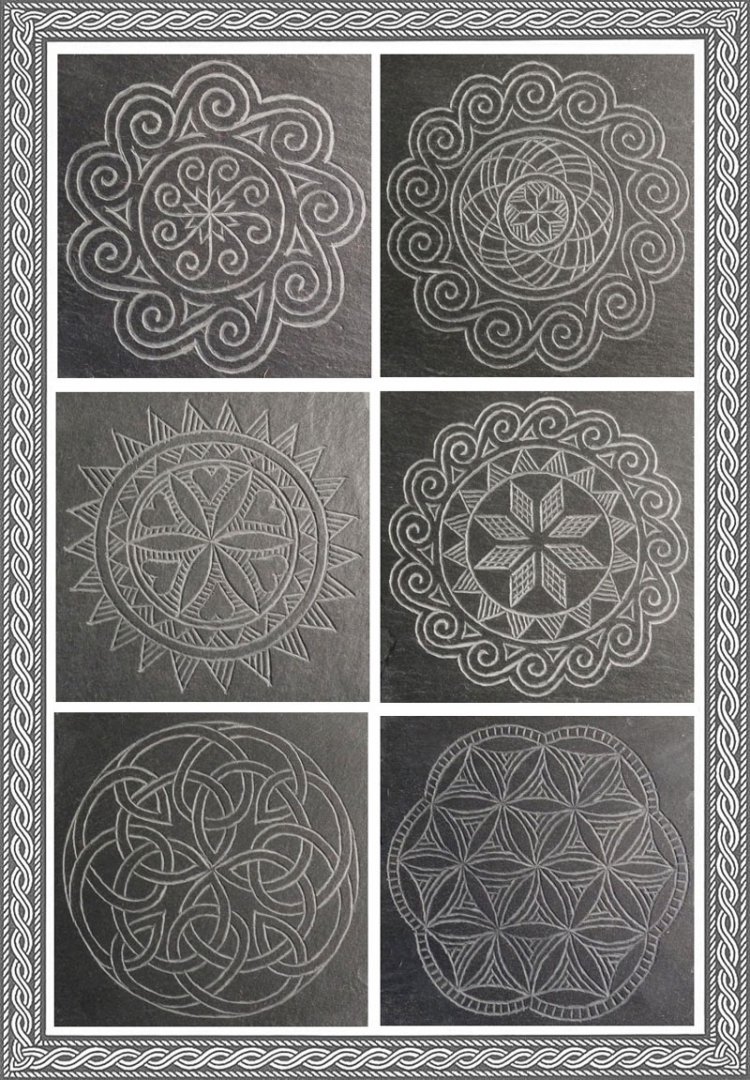 Patterns of ornaments engraved in a slate. 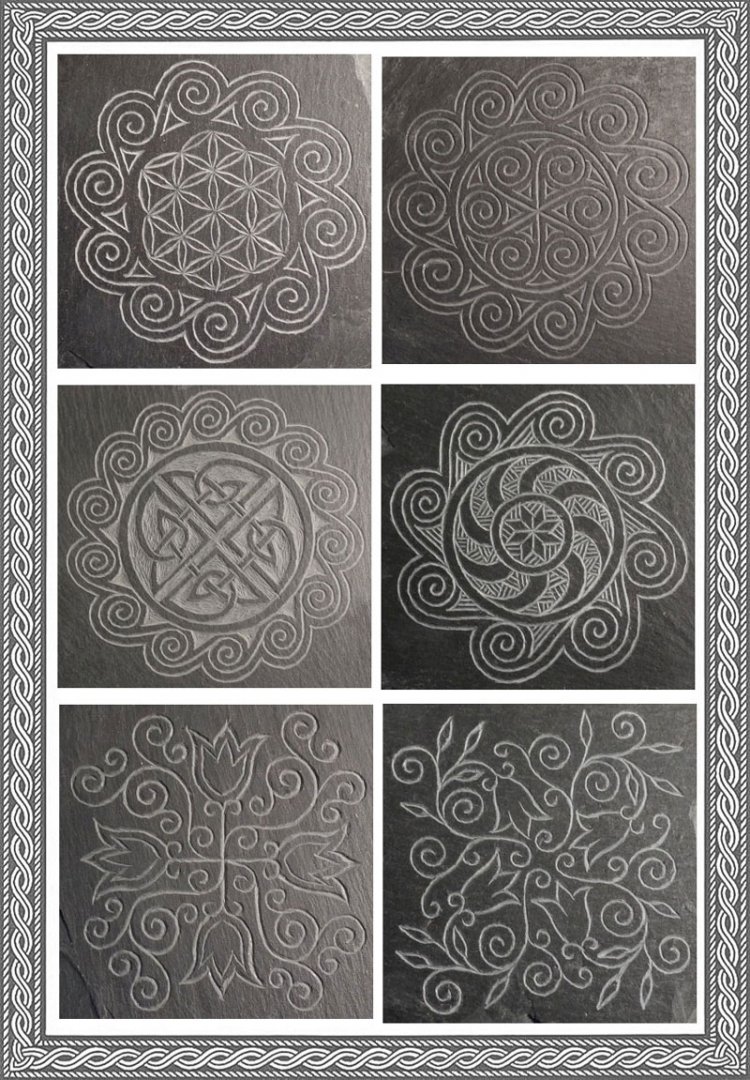 Other patterns engraved in a slate.

The picture below shows our drawing, which shows a theme; the World Tree of Irminsul and the winter solstice of Christmas. An illustration with a combination of geometric style in the form of a frame made of stars, entanglements, and spirals. 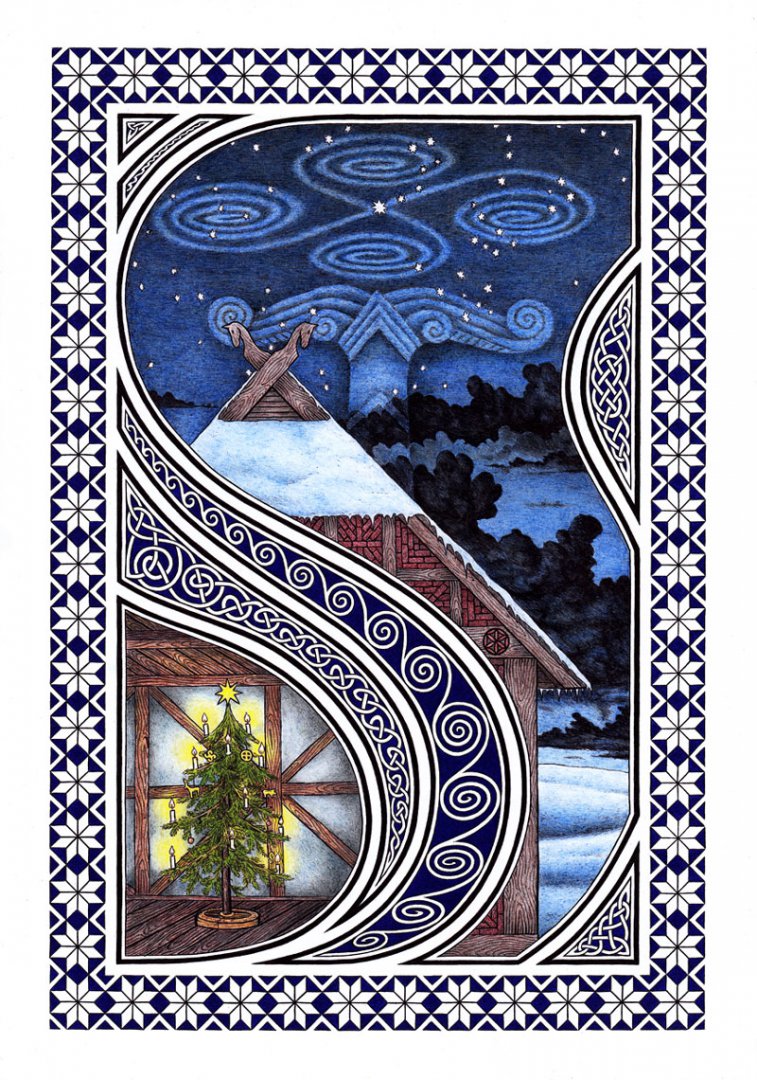 Drawing with the motif of the Tree of the World and Christmas - the winter solstice.

In case of your interest or questions, you can contact us at our address: